If you are learning Farsi or planning to do so, you may consider visiting Iran. There are many beautiful places to see. Of course, even if you don’t speak Persian you will be fine as in all touristic places people do speak English. Every few weeks I will describe tourist attractions of different cities.

I will start this series with my hometown, Shiraz. Not because I really love that place but because Shiraz is really one of the most beautiful cities. Historically Shiraz is known as being a city of flowers and nightingales (شهر گل و بلبل). Shiraz is the city of love and Persian poetry, and home to many touristic sites including the tomb of Hafez, a well-known Persian poet from the 14th century. Saadi, another celebrated poet of the 13th century, is also buried in Shiraz. There are number of old and glorious gardens in Shiraz, all worth visiting. 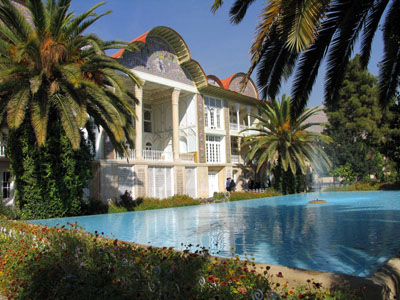 The Eram garden (Garden of Paradise) in Shiraz is a typical Persian garden. With a waterway leading towards the historic Qavam house. The garden belongs to Shiraz Agriculture University since the 1979 revolution and I can admit that they are taking a really good care of it. In different seasons there are plenty of different flowers and trees but the best time to visit is Spring time. 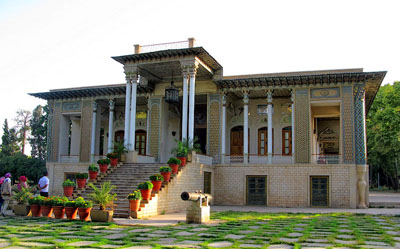 The Garden was built in 1863 during Safavid period. It was a place for Safavid Shahs and Ghavam Family. Currently the garden is open to public and functions as a weapons museum. In spring this garden is exceptionally beautiful with the aroma of bitter orange blossoms all around it. I used to live very close to this Garden when I was a teenager. I remember, late May and at the beginning of June this garden was like a real paradise and me my sister and my mum were walking through flowers and trees. I never enjoyed the building in the middle which is a weapons museum but for unknown reason, the place is very popular among male tourists. 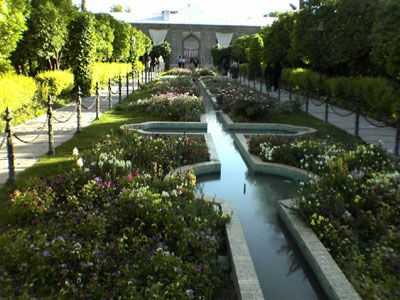 Delgosha literary means ‘heart opener’! In Farsi when we are upset we say ‘Delam gerefte’ meaning my heart is closed, so now you should be able to guess what heart opener might indicate to: yes, bracing! This garden is one of the most famous gardens and it belongs to Sassanian Empire era. But some of the buildings in the garden were constructed during Qajar dynasty. The garden is approximately 7.5 hectare, it is full of citrus trees including oranges and sour oranges. What’s interesting is that Sa’di Tomb Canal is passing just through this garden. If you are upset and walk in this garden with its refreshing water channels and unique trees, it is impossible not to became cheerful or ‘delgosha’! 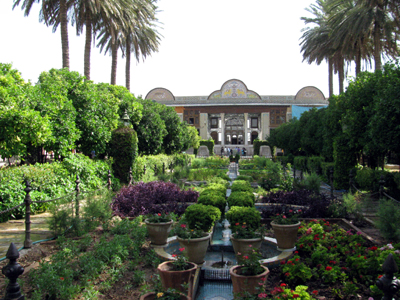 The word Naranjistan is made from Naranj + estan: Naranj is a sour orange famous for its blossoms aroma. And istan is a suffix indicating ‘place’ in Farsi (eg.: Afghanistan, Pakistan). Therefore literary it means place of sour orange trees. In Farsi all names have meaning and you can often break words to find out their meanings. This garden is a traditional Persian house with a beautiful garden which is now open for public. It was built in 1986 during Zand Dynasty. The building in the garden is representing life style of upper class families during 19th century with painting on the ceiling inspired by Victorian era Europe. Naranjistan garden along with the Eram Garden are Botanical Gardens of Shiraz. 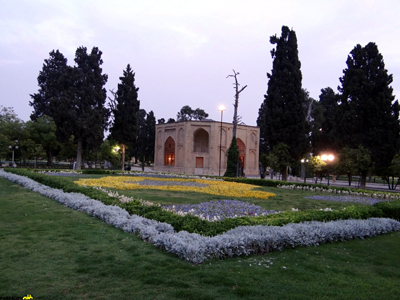 Jahan means World, Nama means facing. Facing a World, this garden was opened relatively recently but experts believe it is one of the oldest in Shiraz. It is particularly beautiful during night and there is very interesting building in a middle of the garden. The building now turned into a museum with some old pictures of Shiraz and is definitely worth visiting.

I am a native Farsi teacher and social anthropologist, who has been teaching Farsi since 2011. I have taught over 100 hours of private tuition at all levels. I have B.A. in Social Science, M.Sc. and M.A in Social Anthropology and Anthropological Research.
View all posts by Maryam →

Learning Farsi: what are common difficulties?